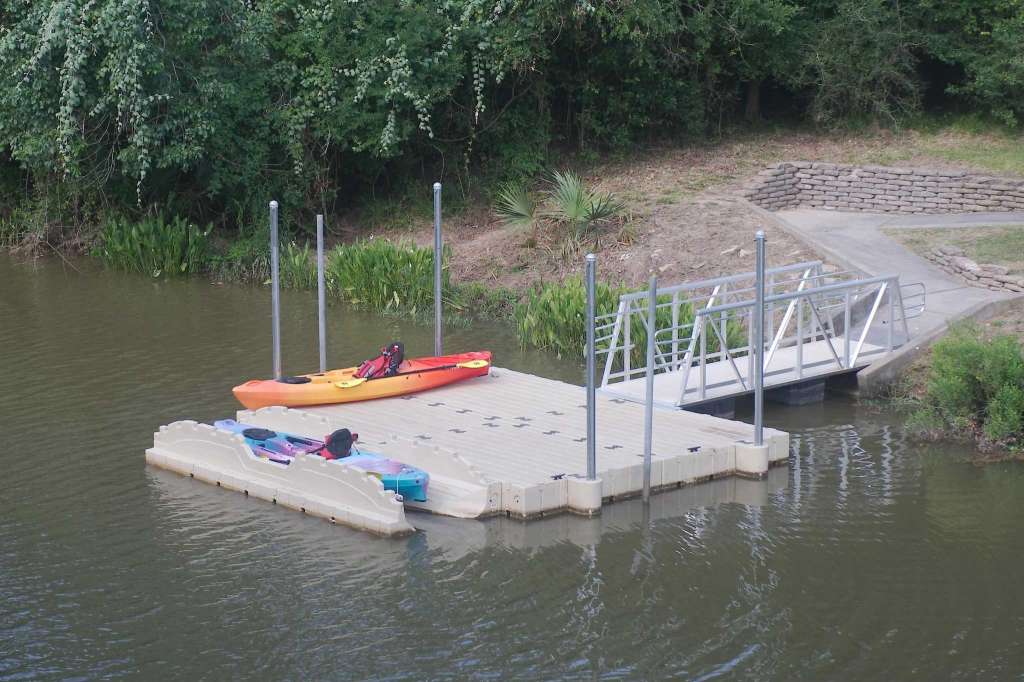 Getting in touch with nature just got easier in Pasadena.

Big Island Slough, 9800 Red Bluff Road, got some new additions in the past few weeks, one of which is particularly attractive to kayakers.

“This is great,” James Kinzler said as he looked at a new kayak launch perched on the shore of the slough. “We’re big kayakers; so we’re happy with this.”

Kinzler’s “we” was his wife, Kim, and friends Joe Schwarz and Tina Bryan. The four didn’t get to the park via water. They pedaled in to take a break during a bike ride on the trail that runs along Red Bluff Road.

“They cleared out a bunch of (foliage) here, too,” Kinzler said. “Now you can sit on this bench and get a great view of the water.”

Big Island Slough is not a very big waterway, but if kayakers put in at the park and head north, they can go deep into Pasadena. If they head south, they will soon be in Armand Bayou, which flows into Clear Lake.

“This is part of the Texas Paddling Trail for Armand Bayou,” Pasadena Parks Director Jed Aplaca said. ”You can put in here and go down to Armand Bayou. Somebody told me it’s about 30 minutes to Bay Area Park from here.”

The park is City Councilman Thomas Schoenbein’s District H. Though a novice at kayaking, he gave the new launch a try on Thursday. He took to kayaking like a duck to water.

“It was scary, but it was relaxing,” he said. “When you don’t do something very often, you get a little nervous, but that was fun.”

Jun 15 2020
MFG Chemical, a global leader in specialty and custom chemical manufacturing has successfully achieved ISO 9001:2015 Certification on its 26.7 acre plant in Pasadena, Texas. This is one of four (4) MFG Chemical plants, the other three being in Dalton, Georgia and having already received their ISO 9001: 2015 Certifications. MF...Continue Reading

Jun 10 2020
A study is underway as part of an effort to improve quality of life and pedestrian access in a historic section of Pasadena that includes City Hall and the city’s central library. The Livable Centers study, funded largely through a Houston-Galveston Area Council grant, looks for ways to enable people to live, wor...Continue Reading

Jun 3 2020
Phunware Inc (NASDAQ:PHUN has announced plans to deploy its mobile Smart City solution in Pasadena, Texas to improve citizen engagement and address critical challenges due to the coronavirus (COVID-19) pandemic. In a statement, the Austin-based company said the contract marks the first deployment of its Smart City solution, which was announced to the public in April. Phunware’s Smar...Continue Reading