Painting a New Picture of Pasadena 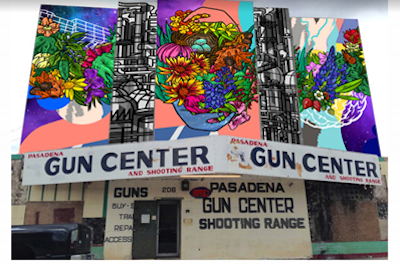 Paintings often bring out an artist's view of their subject, often revealing beauty not realized by other viewers. As seven artists create murals on buildings in Pasadena’s Shaw Avenue District, they seek to reveal the beauty that has always existed locally, helping to revitalize the community in the process.

“The artwork serves as a reminder that the revival begins within,” said Mila Sketch, one of the seven artists, in her statement on her mural. “This is where the change in the world starts and ends.”

Revival is the core of a project by the Pasadena Economic Development Corporation (EDC) as it seeks to enhance the visual appeal of Pasadena and reinvigorate the Shaw Avenue area.

“Our goal is to preserve and enhance this special place by modernizing and improving the built environment, supporting the existing small businesses, and creating an inviting place that inspires small-scale reinvestment projects,” said Sheena Salvino, PEDC Redevelopment Manager.

Shaw Avenue’s history in Pasadena began as a vibrant center for social activity and commerce before the construction of State Highway 225. While the highway's construction served the purpose of mass transit between Houston and the Gulf Coast, it has shifted focus away from the Shaw Avenue District and the community wants to change that. Working with a small group of committed private building owners in the Shaw District, the Pasadena EDC has funded the mural project as part of a comprehensive revitalization effort. Other portions include Shaw Avenue infrastructure improvements totaling $2.8 million currently underway to develop creative infill and adaptive reuse projects, including roadway repaving, widening of sidewalks, and upgraded utilities. An additional $1.5 million has been allocated for pedestrian improvements including paving of sidewalks, crosswalks, pedestrian lighting, trees/plantings, and pedestrian furniture.

The theme of the mural project is “Revive/Revival.” Pasadena EDC staff established a small review panel of professionals to find artists and then review, grade, and vet submissions. The panel consisted of Shannon Raygoza, Fine Arts Coordinator for the Pasadena Independent School District, Jesse Sifuentes, a professional muralist, and Matt Kubo, with the Houston Arts Alliance in Public Art Installation. The panel reviewed over 30 submissions on several concepts, including the overall creativity and interpretation of the theme; suitability of the work for outdoor display, including its overall durability or longevity; a relationship of the work to the site and the community, especially how it serves to activate or enhance the space or public surroundings; and appropriateness of the scale of the artwork. The muralists chosen were distinguishable through their unique styles and ability to incorporate the theme into their design.

“As a committee member, my priority, beyond the criteria set forth by the Pasadena EDC, was a connection to the community and the ability to provide a relevant product for the community to enjoy and connect with,'' said Raygoza. “We looked for mural proposals of relevance, beauty, and impact towards increased exposure drawing people from outside the community.”

Raygoza said an important aspect of the project is that one of the artists chosen is a product of the Pasadena school district, which defines connection, community and bringing back or reviving. While the murals certainly will beautify the area, the attention they will draw to an area that has gone unnoticed will be of even greater importance.

“The Shaw Avenue District will now be an attraction for the greater community and tourists due to the exposure from Highway 225,” she said. “People like to take photographs of themselves in front of murals to show time, location and create conversation.”

Saraf’s mural is completed along the freeway access road and his artist statement is:

Pasadena is known for its lush green vegetation and so is named after Pasadena California. The designs submitted are vibrant, fresh and provide a sense of motivation, revival, and vivacity and truly depict the soul of the place. I have developed designs on the theme “revival” based on the concept of Five Elements of the Universe: water, air, space, fire, and earth. All these together make the life and revival of life in this universe possible. These are the elements that revive life, nature, and human existence in this universe. The sun and the water are considered life-giving elements for humans, animals, flora, fauna, and so on. For example, sun and water together could revive a dying plant. The design-expressing elements of the universe, each symbolically represents the specialties of the city of Pasadena and the region around. The space element of the universe in the design represents Space Center Houston, water element represents Port of Houston, Surfside, etc. The earth element is represented for Armand Bayou Nature Center, the human life, wildlife, marine life, etc. Children's museum, Houston Zoo, etc. is represented by showing human figures in warli form, animals, and includes the flora and fauna that grows well in and around Pasadena. These beautiful flowers, like Eastern Purple Coneflower, Black-Eyed Susan, Texas Lantana - Gulf Coast Penstemon, Mexican plum, Hinckley Columbine provides a sense of vibrancy to the place. Pasadena has all these elements present in the region that makes it a vibrant, lively place. 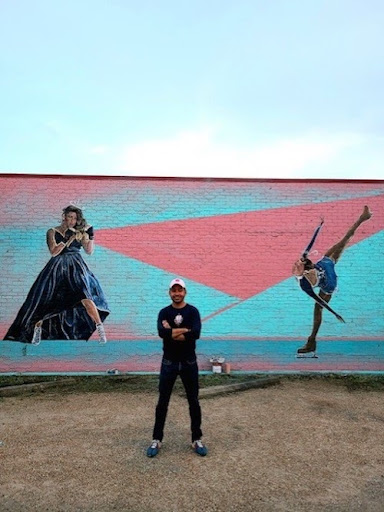 Bengston’s mural can be viewed at Awards by GCT on Shaver St. and his artist statement is:

The ‘future is female’ is part of my new series of work inspired by female leaders in our country. This mural depicts female leaders such as Emily Chan, the U.S. Junior National Figure Skate Champion, and Marlen Esparza, Olympic Competitor of 2012 as well as Bronze Medalist in Women's Boxing, both natives of Pasadena. I think it's important to draw attention to iconic figures that have thrived and are native to the area in order to promote vision and support aspirations for young women. 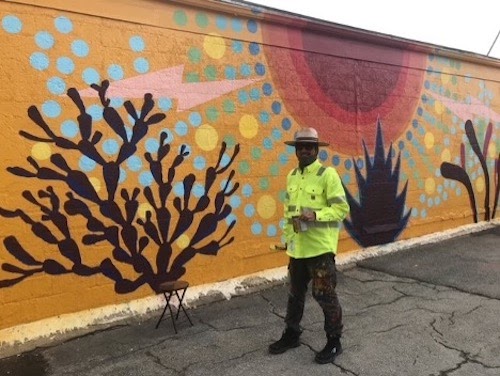 Quesadas’ mural can be viewed at Awards by GCT on Shaver St. and his artist statement is:

This image is another that is inspired by Mexican embroidery and the Texas landscape. The bold colors give an electric quality that is a part of the Texas climate.

Maldonado’s mural is in progress at Pasadena Sporting Goods and his artist statement is:

The meaning behind this design is the idea of building something meaningful with what we do have even if it means starting with the little things and maybe that’s the start of reviving something. I used the mockingbird building this nest, which was supposed to resemble more of a heart, as an analogy.

Sketch’s mural can be viewed at Pasadena Gun Center, Shaw Ave and her artist statement is:

The artwork centerpiece is a human hand holding the gorgeous Texas live nature world as a reflection of the inner self. The main inspiration for this mural is the beauty of the inner world. The artwork serves as a reminder that the revival begins within. This is where the change in the world starts and ends. The mural is sending a robust, unifying motivational message - look inside to find your real beauty as the beginning of the world's transformation for the better. The following native species are featured: The monarch butterfly, Mockingbird eggs, Bluebonnets, Texas lantana, Prickly pear, Agave, Live oak leaves with an acorn, Golden phlox, Indian blanket, Indian paintbrush, Purple coneflower, Giant spiderwort, Goldeneye phlox, Cedar Sage, Prairie verbena, Four-nerve daisy Winecup, & Pink Evening Primrose Texas Yellow Star. The Phillips disaster in 1989 served as a hard lesson that took away 23 lives and injured many people. Events of this caliber should not be forgotten. I wanted to highlight it in the mural as it deeply touched many hearts in the community. It resembled, in a factory's shape, industrial pipes on both columns in the proposed design.

Gonzales’ mural is in progress at Pasadena Sporting Goods and her artist statement is:

In my image, the concept of "Revival" is represented through the life cycles of a sunflower and a moonflower from seed to blossom. These frame the silhouetted figures that reach towards a revival of connecting with each other, the cosmos, and the earth.

Ronen’s mural will be viewable on Main Street

Aug 5 2021
PASADENA, Texas--(BUSINESS WIRE)--Aspen Dental has officially opened its doors in Pasadena, Texas with the opening of a brand-new office, bringing a renowned dentist to the community. This is the 47th Aspen Dental practice in the state of Texas, as Aspen Dental continues to break down barriers and bring comprehensive, affordabl...Continue Reading 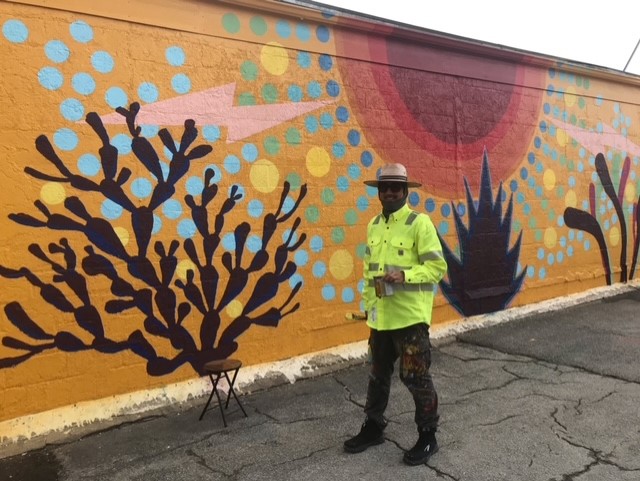 Jul 21 2021
When the Shaw Avenue revitalization project is finished, it will truly be a piece of art. Actually, multiple pieces of art, as seven murals are slated to adorn walls in Pasadena’s historic Shaw District and four of them are already in place. The artwork is part of a $2.8 million project funde...Continue Reading 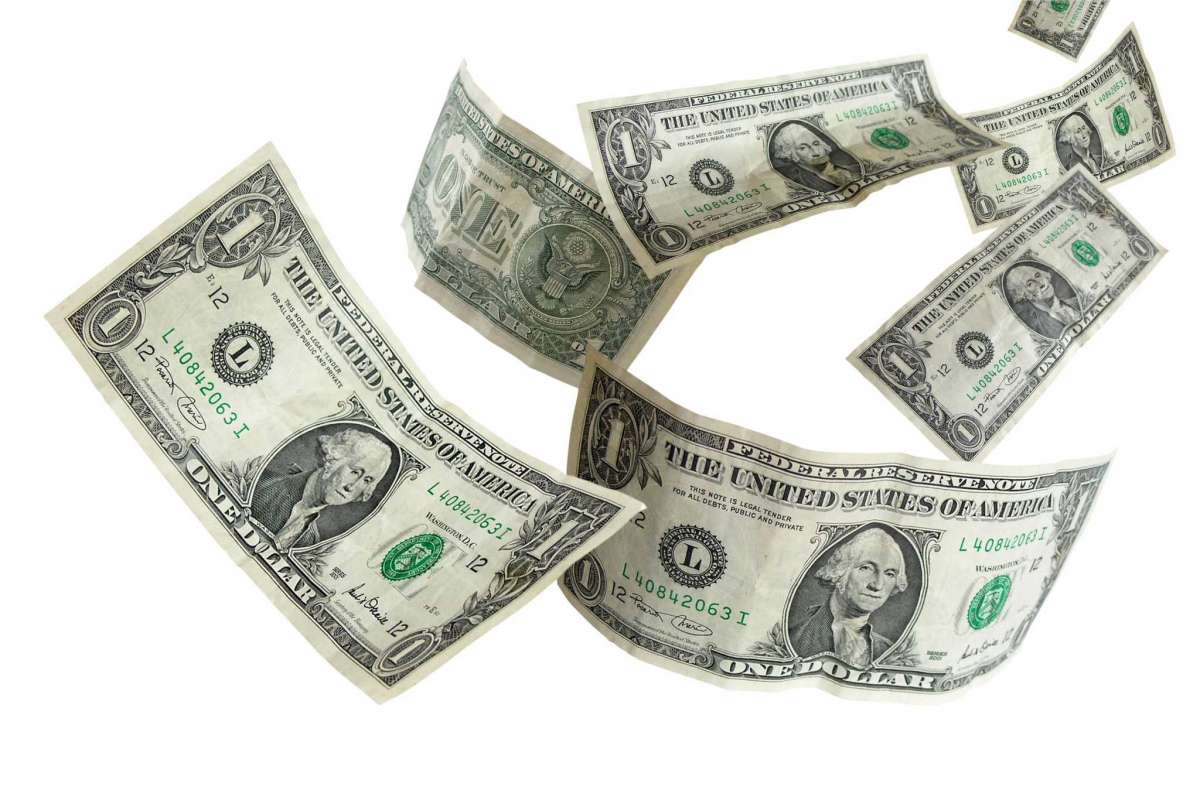 Jul 20 2021
While the monthly sales tax receipts report was good news for many cities in the area, Pasadena was a huge winner. When the Texas state comptroller’s office released the figures for May recently, it showed Pasadena enjoyed a 47.9 percent year-on-year increase in sales tax revenue. This May, the city garnered som...Continue Reading